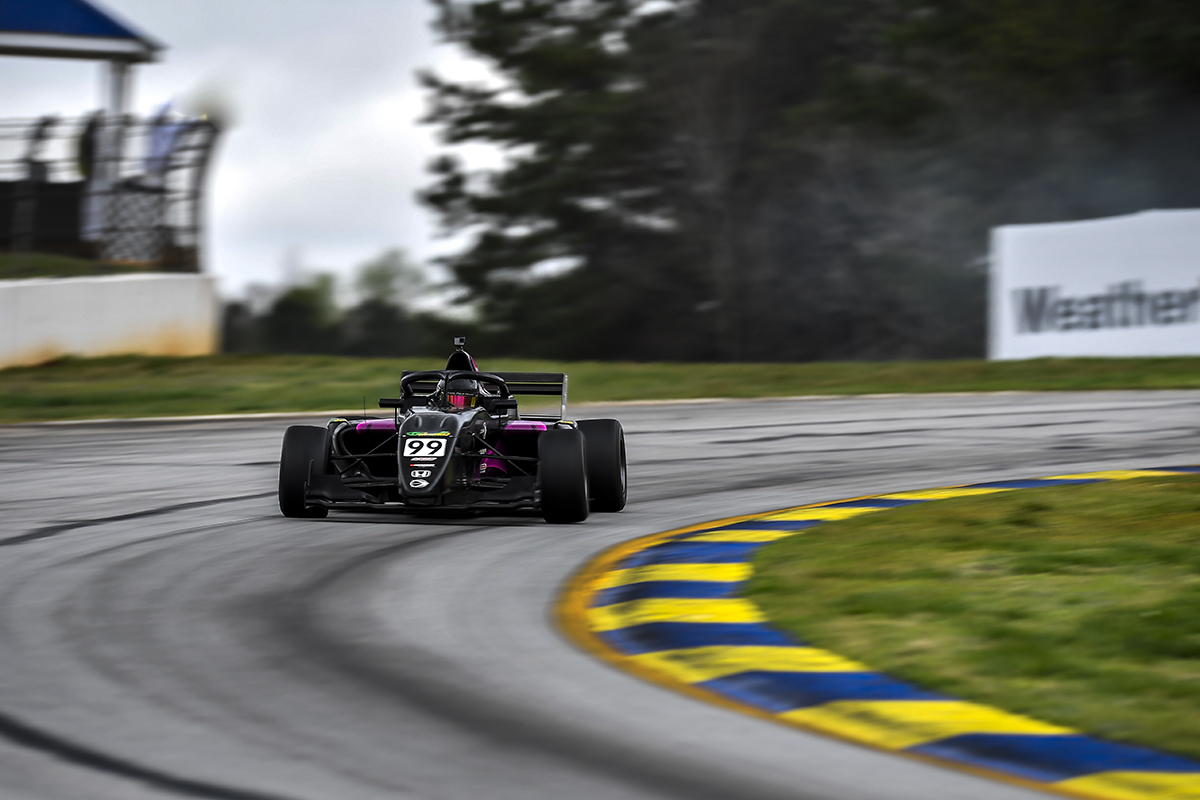 With only a day of testing under his belt prior to the start of the 2021 FR Americas Powered by Honda championship, Logan Cusson was looking forward to his first event. Qualifying on the front row, earning a podium result and two top-five finishes, the Canadian driver has now reset his goals for rounds four, five, and six at the Mid-Ohio Sports Car Course in May.

Returning to the FR Americas program in 2021, Canadian Logan Cusson joined TJ Speed with the goal of running at the front of the field. After one podium in 2020 and a very limited winter test schedule compared to others, Cusson progressed through the Promoters Test Day running in the wet before showing his true pace during Friday afternoon’s qualifying session.

“I’m really happy about how my qualifying went,” explained Cusson, who eventually ended up second and started race one from the outside of the front row. “I traded pole with my teammate Kyffin the entire session, and I know where my missing time is to put me on pole. I’m really looking forward to tomorrow’s races and starting the season off strong.”

Returning to the track on Saturday, Cusson started alongside his teammate as the pair raced to the first corner. Missing out on taking the point, Cusson fell back one position to third. Steadily maintaining his pace, the Canadian lost one position before mid-race distance but quickly earned it back a few laps later. Crossing the line in third and earning his first podium of the season, Cusson celebrated on the podium. Along with the third-place result, Logan also secured an outside row two starting position for race two courtesy of claiming the fourth fastest lap of the race.

In an uneventful second race of the weekend, Cusson managed to hold his own, soldiering around in the top-five. Scoring the fourth position on track and earning his second top-five finish in as many races, while battling for position Cusson was only able to secure the seventh fastest lap time and will start inside row eight for round three on Sunday.

With weather moving through the area on Sunday morning and rain pummeling the Road Atlanta facility, the FR Americas grid was expected to go out on wet weather Hankooks. With the F4 drivers running just before them and a drying track, the decision was made for slicks and it proved to be the right choice. Starting in the seventh position, Cusson moved to sixth on the opening lap, fifth on lap two, and fourth on lap three as he was hunting for his second podium result of the weekend. Lap five saw the Canadian fall to P7 after attempting a pass for third but his pace continued as the second quickest driver on the circuit. The caution would fly on lap six bunching up the field and as the green flew, Cusson advanced forward again before an off-course excursion relegated him down the running order and an eventual sixth-place result. While the result was not what was deserved, Cusson was able to score the second-fastest lap of the race, a scant .070 behind his teammate and race winner.

“Too many mistakes in race three cost us a definite podium,” added Cusson. “Our speed is there, and I know we can compete. I am excited to see what the rest of the season has in store. A huge thank you to TJ Speed, my Coach Victor Franzoni and all of my partners for the help, and support throughout the weekend. On to the next one!”