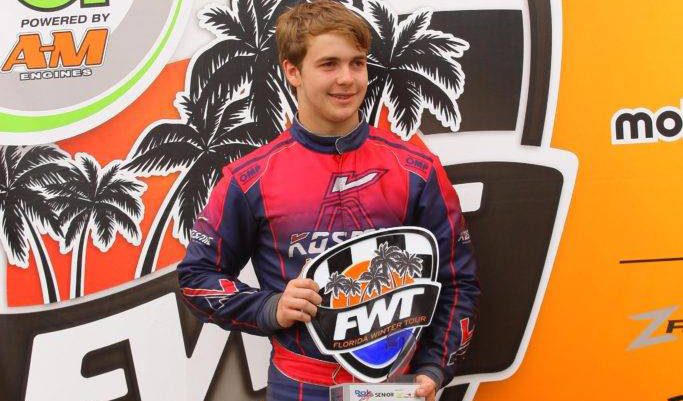 With only three laps left in the race Logan was on the tail of the leader, Mathias Ramirez and was able to overtake him in corner four with an aggressive inside pass. However, during the last lap teammate Ryan McDermid was also able to pass Ramirez and would go on to finish the race in first. The race saw some controversy as the race stewards awarded penalties to multiple drivers including Logan for his corner four pass of Ramirez, but ultimately disqualified Ramirez from the race altogether for his post-race actions. Logan, after penalties, made the podium in third.

I know the pass at corner four to overtake Ramirez was a gamble and I thought I got through him cleanly, but the officials saw it differently. Sometimes that’s just what happens in racing, when everything is moving so fast. Ultimately, I was proud of my racing and ability to finish at the top.
–Logan Cusson

The third-place finish was enough to propel Logan to his international championship podium finish, Rotax Senior Florida Winter Tour Vice Champion. He admits the challenges faced by drivers in these events, far outweigh the competition he typically faces at the club level.

Logan is a team member of Racing Edge Motorsports (REM) in the top driving class, Rok Senior at the FWT. Logan is participating in the Rotax Max Challenge also in preparation for his home season in the Eastern Canadian Karting Championship from his home course at Mosport Karting with hopes of reaching the ASN Canadian National Karting Championship.

With a daunting list of races in front of him, including the ASN Canadian Karting Championship and the SKUSA Super Nationals in Las Vegas in November, Logan feels he is up for the challenge. “It will be a big development year for me and I’d love to see the podium again this year at a national or international level, but it was great to get this early” states Logan.