TORONTO, ONTARIO (August 30, 2017) – Logan Cusson claimed the 2017 Canadian ASN Vice Champion position.  In a nail-biter final, Logan ultimately finished ahead of his Super Pole qualifying third-place finish showing some excellent driving skills that had him leading the pack for most of the race. 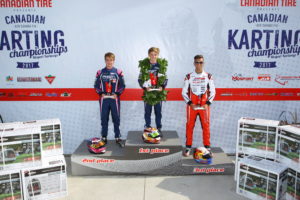 Logan’s future in racing looks bright after adding this second Vice Champion title to his roster. Just five months ago he was also named Vice Champion of the prestigious Rotax Senior Max class at the Florida Winter Tour. At the time, it was a career highlight, but he is happy he can add a top-place finish at home to his racing resume.

“It is exciting to be the Canadian Vice Champion, on my first attempt since focusing on two-stroke racing. I want to thank my teammates and competitors for a great week of racing and in particular Team REM and my coach, and engine builder, Kevin Glover for all the support.”  –Logan Cusson, LCR, Driver

ABOUT LOGAN CUSSON RACING
LCR was developed in response to the pursuit of Logan Cusson becoming a champion professional driver. Logan started karting at a club level at 14 years old at his home track, Mosport, but quickly expanded to racing at the national level as well internationally (he is the 2017 Rotax Vice-Champion for the international prestigious Florida Winter Tour). LCR is a driver development company focused on developing karting drivers to their fullest potential. www.logancussonracing.com. Also be sure to follow LCR via its social media accounts on Twitter, Instagram, Snap, YouTube and Facebook by searching LCR or Logan Cusson Racing.

ABOUT RACING EDGE MOTORSPORTS
Racing Edge Motorsports (REM) is a professional kart racing team based out of Toronto, Canada. The team was founded in March of 2011 by Kevin and Wendy Monteith. The Monteith’s are no strangers to the world of competitive kart racing and have considerable amounts of experience competing in North American karting events and competitions. https://racingedgemotorsports.com