Logan Cusson Racing (LCR) is a group of professionals committed to high-performance in each of their own lanes in order to support the one over-arching goal: driving success for Logan and the LCR brand. 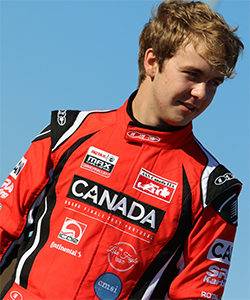 The 2018 creation of LCR and a first season of open-wheel racing was just another step on the path to fulfilling Logan’s objective of becoming a leading INDYCAR driver. Early in Logan’s racing career he realized that no matter the circumstance, win or lose, one mantra holds true: Never Stop Pushing!

Logan Cusson started racing relatively late compared to his peers. He joined the club ranks of karting at 14 years old but quickly expanded to racing at a National level (he is the 2017 Canadian National Vice-Champion) as well internationally (he is the 2017 Rotax Vice-Champion for the international prestigious Florida Winter Tour). Logan also represented Canada at the World Karting Championships in Portugal in 2017.